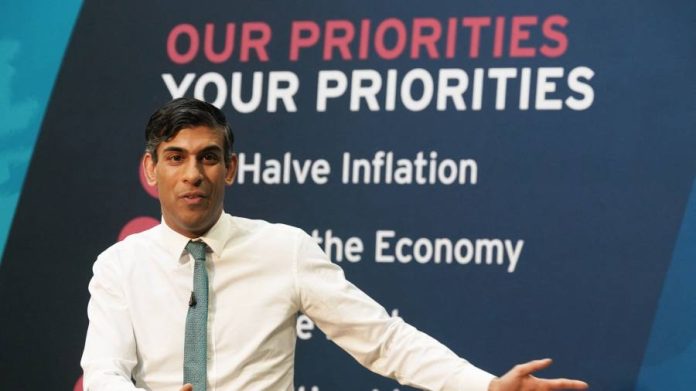 This article is an on-site version of our Inside Politics newsletter. Sign up here to get the newsletter sent straight to your inbox every weekday

Good morning. Rishi Sunak is doing his “I will cut taxes tomorrow, bet your bottom dollar” routine again. Some thoughts on that in today’s note.

Inside Politics is edited by Georgina Quach. Follow Stephen on Twitter @stephenkb and please send gossip, thoughts and feedback to insidepolitics@ft.com

When Rishi Sunak was chancellor, his close allies had a compelling explanation for why a man with a picture of Nigel Lawson on his wall had hiked taxes to their highest level since the 1940s.

They said the problem was that the then-prime minister Boris Johnson had never met a spending commitment he didn’t like, nor accepted a trade-off which he didn’t enjoy pretending wasn’t there. If Sunak himself became prime minister he would argue for fiscal restraint, a smaller state and, eventually, lower taxes.

That was essentially the subtext of Sunak’s resignation last year, too:

I firmly believe the public are ready to hear that truth. Our people know that if something is too good to be true then it’s not true.

Anyway, here we are in January 2023, and Sunak is prime minister. Here’s his latest on why the British government is not yet cutting taxes:

I’m a Conservative, I want to cut your taxes. I wish I could do that tomorrow quite frankly but the reason we can’t is because of all the reasons you know. We had a massive pandemic for two years, we had to shut the country down, do a bunch of extraordinary things that didn’t come cheap. Now we’ve got this war going on which is having an enormous impact on inflation and interest rates.

Now, it’s true to say that both the invasion of Ukraine and Covid-19 pandemic resulted in additional pressures on UK government spending. But the biggest reason the UK’s tax burden is rising are the increasing costs of the UK’s pre-existing spending commitments.

Sunak’s reluctance to make the argument for a smaller state is in part, as Robert Shrimsley argues, a consequence of British politics’ “long populism” problem: Sunak is scarred by his failure to defeat Liz Truss in the summer’s Tory leadership contest, while Keir Starmer and the Labour party are similarly bruised by their failure to defeat, well, almost anyone for some time now.

As a result, we have a prime minister who is so hesitant to argue for what he believes that he won’t even openly discuss his own healthcare arrangements other than under duress. We also have a leader of the opposition who is steering well clear of any talk about serious tax rises, beyond, as Chris Giles puts it in his column, “the odd windfall tax or levy on private schools”.

As I wrote in my column recently, I think that Sunak needs to accept that he is never going to be the tax cutter he sees when he looks in the mirror. Instead he should make the next election about his tax rises (because whatever happens and whoever wins the next election, taxes are going to continue to rise) versus Labour’s, on the grounds that everyone knows neither party is being straight about tax rises anyway.

“How should democratic capitalism fit into the world?” writes Martin Wolf, our chief economics commentator, in his weekend essay today. Join Martin and other thought leaders online for a subscriber-exclusive event on January 31 to debate the crisis in democratic capitalism, and how reform might be put into effect, at a time of great global uncertainty. Register for free for the live event, streamed at 18:30-19:30 GMT, here.

I saw Six at the Vaudeville Theatre. Terrific fun, wonderful costumes: rather upsettingly, the best song (Anne Boleyn’s entry music) is not on the soundtrack.

However you spend it, have a wonderful weekend!

News - February 15, 2022 0
Intel Corp is close to buying Israeli firm Tower Semiconductor for about $6 billion with a deal possibly being unveiled this week. Source

Chris Evans Switched To An iPhone 12 Pro, But Misses The Home Button

News - August 12, 2022 0
According to Montenegrin Police Chief Zoran Brđanin, the suspected shooter first attacked a family that was living in his house as tenants. "He killed...

News - April 23, 2022 0
Ukraine's Prime Minister Denys Shmyhal called the situation in Mariupol the "biggest humanitarian catastrophe" since Russia's invasion -- and perhaps the worst catastrophe of...
© 2022 Venture Current is a Flag Media LLC Publication. All Rights Reserved.
VC is part of the FLAG Token rewards network. Clients and partners can use FLAG Tokens for VC products and services.
VC runs 'Automatic' software. Stories posted here come from generic-topic Google news RSS feeds as well as client and partner-approved content.
If a story appears on this page that needs to be deleted due to licensing issues, please message us immediately so we can help you.