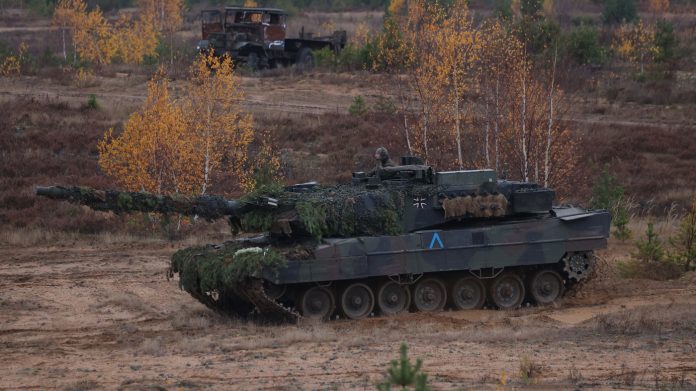 Even as the U.S. and its NATO allies have announced another package of military aid to Ukraine, full of military vehicles, air defense systems, rockets and missiles, a notable omission is the one piece of equipment that has come to dominate recent talks: tanks.

For months, Ukrainian officials have pressed the West for hundreds of modern battle tanks like those made by the U.S. and Germany.

“I can thank you hundreds of times, and it will be absolutely just and fair, given all that we have already done,” Ukrainian President Volodymyr Zelenskyy said at this week’s meeting of defense officials in Ramstein, Germany.

Recent debate has centered on the Leopard 2, a German-made battle tank operated by about 20 countries worldwide, including more than a dozen NATO members.

Germany has come under growing pressure to provide some to Ukraine — or to allow other countries, like Poland, to send theirs.

So far, that hasn’t happened. “We cannot say today when a decision will come and what it will look like,” German Defense Minister Boris Pistorius said Friday.

What is the Leopard 2?

The German-made Leopard 2 is one of the most well-reputed battle tanks in the world, perhaps second only to the U.S.-made M1 Abrams tank, military arms experts said.

The Leopard 2 was originally designed in the 1970s for the West German army in response to Soviet threats during the Cold War. They are built to move quickly over a variety of terrain and confront enemy armor — like the tanks Russia has been using on the ground in Ukraine since the first days of its invasion last year.

Each tank boasts a 44- or 55-caliber 120-mm main gun and a 1,500-horsepower engine that allows it to move as fast as 44 mph, according to Krauss-Maffei Wegmann, the German defense company that manufactures the tank. Some 60 tons of armor protect their crews from return fire.

Among the countries that operate the Leopard 2 is Poland, which has pledged to send 14 Leopard 2 tanks to Ukraine but must await Germany’s approval to do so.

Why are tanks important to Ukraine’s war effort?

Since Russia began its invasion of Ukraine last February, tanks have been prominent on the battlefield.

For its part, Ukraine has mostly relied on Soviet-era T-72 tanks. The West has already supplied other armored vehicles and pledged to send still more, including Bradley fighting vehicles and Stryker combat vehicles from the U.S., and a newly announced shipment of Challenger 2 tanks from the U.K.

But none represents the combination of accuracy, firepower and mobility of the modern battle tanks made by Germany and the U.S. Ukrainian officials have said that such tanks could be the key to a speedy Ukrainian victory — perhaps even this year.

That’s a rosier picture than the one painted by Western military experts.

“There is no silver bullet out there. There is no one thing that’s just going to completely change the whole conflict,” said retired U.S. Army Lt. Gen. Ben Hodges.

Still, Western tanks could play a role this spring, when both Russia and Ukraine are widely expected to launch renewed efforts in the conflict, he said.

Last month, the U.S. announced that it would train large units of Ukrainian soldiers in combined arms tactics, in which large-scale military operations use different kinds of weaponry together, including aircraft, artillery and armor (like tanks).

“The ability for us to train the Ukrainians to conduct these very complex maneuvers is really key for them building combat capability as they push forward with their offensive,” said Raphael Cohen, a senior political scientist at the RAND Corporation, in an interview with NPR earlier this month.

Russia’s major victory of the war so far has been its control of Ukrainian territory between the Donbas and Crimea. Russia has controlled Crimea since illegally annexing it in 2014, but before the invasion last year, Crimea’s only connection to Russia was a long road and rail bridge. In seizing Mariupol and the land around it, Russian forces essentially established a land bridge from Russia and the Donbas region of Ukraine to Crimea.

That territory could be the setting of a new Ukrainian counteroffensive, said Hodges, the retired lieutenant general. “The Ukrainians know that the decisive terrain is Crimea,” he said.

With tanks from the West, Ukraine could create an armored brigade that could serve as “the spearhead of a force that could break through those Russian defenses down towards Mariupol,” Hodges said. “The purpose is to continue the isolation of Crimea from everything else.”

More generally, he said, tanks can allow for more effective use of infantry. In open terrain, tanks can lead, allowing infantry to follow safely. In urban or wooded areas, infantry can move in first, preventing the enemy from hiding and striking with concealed anti-tank weaponry.

Germany has continually delayed a decision about the Leopard 2s. Because it makes the tanks, its approval is needed for those allies, like Poland, to re-export them elsewhere.

Ukraine’s leaders had hoped for an announcement Friday, but their wait will continue after German officials declined to make a decision at the Ramstein meeting.

On Friday, Pistorius, the German defense minister, said that officials were still evaluating the pros and cons of sending the tanks. “I am very sure there will be a decision in the short term,” he added.

The U.S. has also been reluctant to send M1 Abrams tanks, which defense officials argue are not as practical for the Ukrainian battleground as the Leopard 2s, which are lighter than newer variants of the Abrams and are more easily maintained.

“The maintenance and the high cost that it would take to maintain an Abrams — it just doesn’t make sense to provide that to the Ukrainians at this moment,” Pentagon spokesperson Sabrina Singh said at a Thursday briefing.

Another drawback with the Abrams is less fuel efficient than the Leopard 2, which is designed to use diesel fuel — and diesel is more readily available in Ukraine’s wartime supply chains.

News - October 7, 2021 0
Hong Kong's market is currently undervalued, but conservative investors may want to stay on the sidelines for now before dipping their toes back in,...

News - November 6, 2022 0
One morning in April 2021, a man at the New Hampshire State Prison was agitated, yelling and giving officers the finger. When he didn’t...

News - January 8, 2023 0
© 2022 Venture Current is a Flag Media LLC Publication. All Rights Reserved.
VC is part of the FLAG Token rewards network. Clients and partners can use FLAG Tokens for VC products and services.
VC runs 'Automatic' software. Stories posted here come from generic-topic Google news RSS feeds as well as client and partner-approved content.
If a story appears on this page that needs to be deleted due to licensing issues, please message us immediately so we can help you.