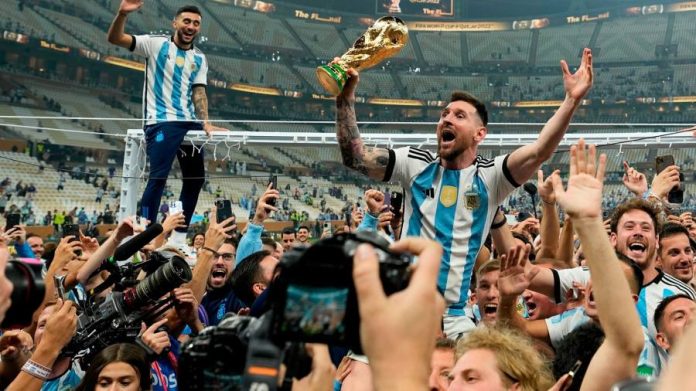 This article is an online version of our Scoreboard newsletter. Sign up here to get the newsletter sent straight to your inbox every Saturday

What a year for sport. Argentina’s victory in the World Cup final was the crowning moment of Lionel Messi’s career, and possibly the greatest match of all time.

Off the field of play, record-breaking deals just kept coming. Investors this year have fled from risky assets, popping the past decade’s bubbles in tech, crypto and Hollywood. And yet, sports transactions kept fetching higher and higher prices. Broadcasters are still paying up for elite sport because it’s pretty much the only product people watch live. And breakaway efforts such as the European Super League and Saudi Arabia-backed LIV Golf keep fighting for a piece of the pie. How long can sports defy all other markets? Will 2023 bring a reckoning?

Below, we also bring you the highlights from the FT/Scoreboard coverage in the past 12 months.

One last thing before signing off for the year: Join LaLiga President Javier Tebas, new AC Milan owner Gerry Cardinale, super agent Rafaela Pimenta and more at the Business of Football Summit on 1-2 March, 2023 to discuss the new wave of investment flowing into the game. As a Scoreboard subscriber, register for your complimentary digital pass using promo code PREMIUM23 or save £200 on your in-person pass to join us at The Biltmore Mayfair, on March 2. Register here. See you in 2023!

Send us tips and feedback at scoreboard@ft.com. Not already receiving the email newsletter? Sign up here. For everyone else, let’s go.

The sports investment boom — are we due a bust?

It’s been a heady week for sports deals, with not one, not two, but three major agreements signed in recent days.

On Monday, American investor John Textor added to his sporting empire with the acquisition of French football’s Olympique Lyonnais, valuing the group at €884mn and extending US influence in European clubs.

On Tuesday, the owner of the National Basketball Association‘s Phoenix Suns and Mercury agreed a deal to sell both teams at an enterprise value of $4bn, a record for a professional hoops franchise and nearly double the previous record price, set in 2019.

On Thursday, Google agreed to pay more than $14bn over seven years for the rights to broadcast the National Football League‘s Sunday Ticket subscription package, one of the largest ever broadcast deals for Big Tech.

Incumbent leagues still have advantages, as was the case when European football governing body Uefa took the upper hand in a legal battle against the body promoting a breakaway European Super League. Expect more skirmishes for the economics of football, with world governing body Fifa aiming to expand its World Cup model to clubs. And as investors assess the shifting landscape, watch out for further ownership changes.

As the ink dries on these latest deals, and with a number of A-list clubs and franchises exploring sales or investments (Manchester United, Liverpool FC, the Los Angeles Angels to name a few), is it possible the ongoing boom in sports deals may bust in the year ahead? And what are they really worth?

Since the start of 2022, the global economy has been gripped by inflation. Rising interest rates have damped dealmaking, and the broader effects of the Russian invasion of Ukraine have disrupted geopolitics, energy distribution, and even sport.

But optimism about the financial prospects for sport has fuelled record dealmaking. One top banker told Scoreboard this autumn that a $10bn pro-sports club sale isn’t unreasonable to expect. Optimists in the sector point to the rapid appreciation of sports assets throughout downturns, including the global financial crisis and the pandemic.

On the horizon are several further complications. The next big kahuna in sports media is the NBA, which is set to negotiate its next broadcast rights package in 2023. NBA commissioner Adam Silver has said the league is committed to expansion of franchises after the negotiations settle. The NFL has made no secret of its ambitions to move or establish a club of its own in Europe. But player associations will have their say before any of these expansion opportunities can be realised.

Highlights of the year

Oh, to have been in Argentina this week. The nation celebrated its first World Cup victory in 36 years in ecstatic fashion, with millions flooding the streets, highways, and overpasses in Buenos Aires for the homecoming of Lionel Messi and company. The delirium was so spectacular a crowd of blue-and-white bedecked fans literally carried away a German newscaster mid-hit. One would-be Argentina celebrant did not have the greatest experience, however: Nusret Gökçe, the Turkish chef better known as Salt Bae, was rebuffed by Messi as he tried to mug the football legend for a selfie during post-final celebrations on the pitch in Qatar. It has since evolved into a micro-scandal, with Fifa investigating how Mr Bae accessed the area.

Scoreboard is written by Josh Noble, Samuel Agini and Arash Massoudi in London, Sara Germano, James Fontanella-Khan, and Anna Nicolaou in New York, with contributions from the team that produce the Due Diligence newsletter, the FT’s global network of correspondents and data visualisation team

Cryptofinance — Scott Chipolina filters out the noise of the global cryptocurrency industry. Sign up here

Unhedged — Robert Armstrong dissects the most important market trends and discusses how Wall Street’s best minds respond to them. Sign up here

News - May 19, 2022 0
ISTANBUL — Turkey’s president emphasized his opposition to Sweden and Finland joining NATO, stating Ankara would say “no” to their bid.Speaking to a group...

News - December 31, 2022 0
The global economy is entering 2023 on the brink of recession after a year of war, inflation and pandemic uncertainty. Will China's exit from...

Microsoft's unique Arc Mouse comes in multiple colors and is now 55% off for...

News - December 15, 2022 0
Microsoft's slim and sleek Arc Mouse is light and easy to stow away, thanks to its unique design. Now, it's on sale for just...
© 2022 Venture Current is a Flag Media LLC Publication. All Rights Reserved.
VC is part of the FLAG Token rewards network. Clients and partners can use FLAG Tokens for VC products and services.
VC runs 'Automatic' software. Stories posted here come from generic-topic Google news RSS feeds as well as client and partner-approved content.
If a story appears on this page that needs to be deleted due to licensing issues, please message us immediately so we can help you.