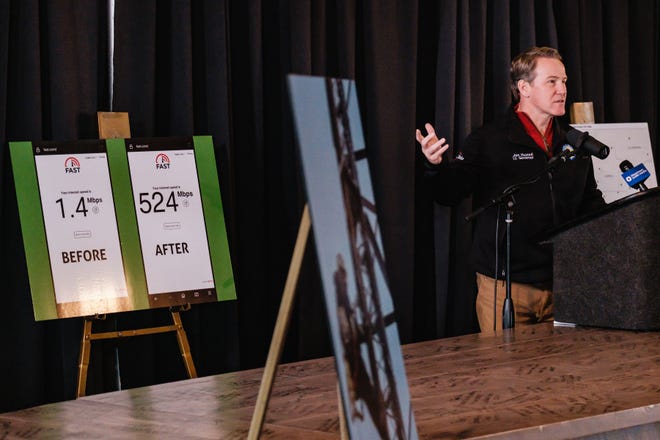 DOVER TWP. ‒ The launch of a new wireless broadband tower is being hailed as a “transformational day” for Tuscarawas County.

The tower, located on Spooky Hollow Road, near Dutch Valley Restaurant in Sugarcreek, will be able to provide high-speed internet access for as many as 2,400 households and 125 businesses in the area surrounding the tower. Available internet speeds are expected to increase from 1.4 megabits per second to 524 megabits per second.

One of the first businesses connected was Breitenbach Wine Cellars near Dover. Its service began Monday.

“I feel like I just jumped on the interstate highway system of the internet,” said owner Dalton “Duke” Bixler.

He said he will now be able to communicate with his suppliers and customers “in split-second timing.”

“I’m just excited for Tuscarawas County and all the businesses. I think we’re all going to benefit in many ways,” Bixler said.

The launch of the new tower was announced at a press conference Monday at the Toolshed at Breitenbach Vineyards, a part of Breitenbach Wine Cellars. Lt. Gov. Jon Husted was on hand for the announcement.

How the network will work

Digital Access Ohio was formed in 2021 by Canton-based Agile Networks to build, own, market and operate up to 75 new telecommunication tower sites, principally in rural Ohio. Digital Access Ohio will design and construct connectivity to those sites and install additional access points on 135 existing towers in the state. Wireless internet service providers can then use this infrastructure to provide broadband to residents and businesses around the state.

Smart Way Communications, based in Uhrichsville, will be the first company to utilize the towers constructed by Digital Access Ohio to provide service in the Sugarcreek area.

“You don’t have to plan for two years, just like fiber,” he said. “You have to go get permitting and everything else to get to that user. We can use an existing vertical asset that’s already there, put an antenna on, go install the antenna in an afternoon in somebody’s house. They can have broadband in under an hour.”

Since Smart Way doesn’t have to build the towers, it can reduce its cost in providing service to residents and businesses, he noted.

The initiative supports Ohio’s Statewide Broadband Strategy, which the DeWine-Husted Administration established in 2019 to improve access for the unserved and underserved groups.

Husted said the initiative is designed to make broadband more affordable for residents in rural areas.

“It’s going to open up the world of healthcare, the economy, education to all these families and businesses that didn’t have access before,” he said. “In a world that is more and more dependent upon these types of connectivities, you now literally empower an entire county, its people and the businesses that are here to open up the doors of operation to everyone to sell things online, to work online, to do other things that they previously couldn’t do.”

Price tag:$85 million needed to bring broadband to everyone in Tuscarawas County

JobsOhio, the state’s private economic development corporation, is helping in the process by providing access, financing and loans to make broadband expansion viable.

“The reason private sector businesses don’t provide internet access is because it doesn’t make financial sense to them,” the lieutenant governor said. “If they can’t recover their costs in seven years, they don’t invest. When you have tough topography to build, not a very dense population and not a population that can really afford to pay a lot, they just weren’t going to build it.”

‘If any part of that isn’t connected, then you don’t get there’

Husted likened the construction of the needed infrastructure to a river.

Commissioner Chris Abbuhl talked about how the COVID-19 pandemic highlighted the need for broadband access in all parts of Tuscarawas County. When schools were closed, students had to do their work online. But many families didn’t have internet at home, so children had to go to church or restaurant parking lots, where access was available, to do their school work.

“So it is my opinion that we have reached beyond the critical point of broadband access and can confidently say that reliable, affordable broadband connectivity is no longer a luxury. It’s a necessity,” he said.

After a hot summer, hiring cools in September as employers add 263,000 jobs

News - January 6, 2023 0
Hackers stole the email addresses of more than 200 million Twitter users and posted them on an online hacking forum, a security researcher said...

News - December 8, 2021 0
Indian Army chief General Bipin Rawat arrives for the Beating the Retreat ceremony in New Delhi, India, January 29, 2019. Picture taken January 29,...
© 2022 Venture Current is a Flag Media LLC Publication. All Rights Reserved.
VC is part of the FLAG Token rewards network. Clients and partners can use FLAG Tokens for VC products and services.
VC runs 'Automatic' software. Stories posted here come from generic-topic Google news RSS feeds as well as client and partner-approved content.
If a story appears on this page that needs to be deleted due to licensing issues, please message us immediately so we can help you.