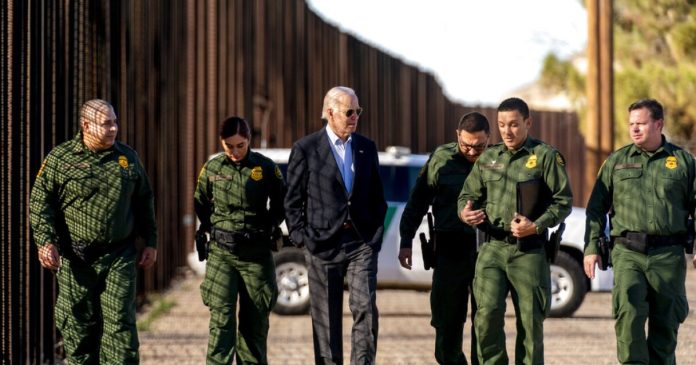 WITH VISIT, BIDEN MAKES THINGS WORSE ON BORDER. Republicans have spent two years demanding that President Joe Biden visit the U.S.-Mexico border. They wanted Biden to face the real-world consequences of his border policy and the burden it has placed on people not only in the border states but around the country. Now, the GOP has gotten its wish; Biden visited the border at El Paso, Texas, on Sunday. But there is bad news: The president used the occasion of his border visit to make things even worse.

Here’s the key difference between Republicans and Democrats on the border. With unprecedented numbers of illegal border crossers entering the United States, Republicans want policies that will stop, or at least dramatically reduce, the flow. Democrats want policies that will accommodate the flow. For evidence of that, just look at two moments in the events surrounding Biden’s brief visit to a cleaned-up El Paso. (U.S. officials removed all the visual reminders of immigrants sleeping in the streets, overwhelming the city’s ability to deal with them, so Biden would not have to see anything unpleasant.)

The first moment came when Texas Republican Gov. Greg Abbott met Biden as Air Force One arrived. Abbott handed the president a letter outlining what needs to be done to solve the border crisis. Noting that Biden’s destination “has been sanitized of the migrant camps which had overrun downtown El Paso because your administration wants to shield you from the chaos that Texans experience on a daily basis,” Abbott demanded that Biden enforce existing U.S. immigration law mandating the detention of illegal border crossers and that Biden also stop allowing illegal crossers to enter the country in huge numbers. Abbott called for the revival of former President Donald Trump’s “Remain in Mexico” policy that required asylum-seekers to wait in Mexico while their asylum cases were adjudicated in the U.S. “On behalf of all Americans, I implore you: Secure our border by enforcing Congress’s immigration laws,” Abbott wrote.

Subscribe today to the Washington Examiner magazine that will keep you up to date with what’s going on in Washington. SUBSCRIBE NOW: Just $1.00 an issue!

That was one moment. The second moment came when Homeland Security Secretary Alejandro Mayorkas met reporters on Air Force One as Mayorkas accompanied Biden on the trip. Mayorkas explained the Biden administration’s new policy in which would-be illegal border crossers can download a new, administration-created app called CBP One. They will use the app to make an appointment to enter the U.S. at a port of entry. Border officials will then let them in — so much more efficient than wading across the Rio Grande — and then quickly move them elsewhere inside the U.S. Having entered legally, they would stay in the U.S. and pursue an asylum claim. This is what Mayorkas said about the plan: “What we’re trying to do is … incentivize a safe and orderly way and cut out the smuggling organizations.”

There it is. The Republican official wants to stop the flow. The Democratic official wants to accommodate it. Biden seeks to put the smugglers out of business by letting everyone in immediately. Under the new program, the U.S. will grant the border crossers parole, the legal term for allowing an illegal immigrant to stay in the U.S., and entering the U.S. will be quick and easy. Biden and Mayorkas, writes former federal prosecutor Andrew McCarthy in National Review:

are telling aliens the world over who want to come to the United States that they just need to let us know they’re coming ahead of time. For this, they just need to use an app or avail themselves of various hubs in Mexico (and elsewhere, to be sure). The idea is that Biden will then purport to grant them parole before they get to the border. The fiction is that this way, when the alien hordes later show up at the border, they won’t be “without legal authorization” anymore. The parole decreed by the chief executive will be treated as if it were a visa granted under legitimate American law.

“The illegal aliens will now apply for parole before they get here,” McCarthy concluded, “so that when they arrive at the border — voila! — they are no longer illegal; they’ll have their Biden parole codes.” There will no longer be reports of hundreds of thousands of illegal crossers entering the U.S. because they’ll all have the Biden seal of approval. Accommodate the flow.

The problem is the president does not have the legal authority to do this. “It is both a gross violation of the narrow, statutory parole authority Congress has granted the executive branch for decades, and an unconstitutional usurpation by the president of Congress’s power to set the conditions for lawful entry into the United States,” McCarthy wrote.

The administration also announced a second plan specific to illegal crossers from four countries — Cuba, Haiti, Nicaragua, and Venezuela. The plan would allow up to 30,000 of them into the U.S. each month with a quick and easy process.

So that is Biden’s response to the border crisis: Keep letting the illegal crossers in, only more quickly and smoothly. And call it legal. It took the president two years to come up with the new plan. During those two years, record numbers of illegal crossers poured into the country, and many were allowed to stay. Now, Biden is doing nothing to stem that flow but rather taking steps to make it faster and more efficient. You have to conclude that he is satisfied with millions of people crossing into the U.S., first illegally and then, under the new system, without much scrutiny or limit. That’s why Biden has done so much to create the problem and so little to solve it.

For a deeper dive into many of the topics covered in the Daily Memo, please listen to my podcast, The Byron York Show — available on the Ricochet Audio Network and everywhere else podcasts can be found. You can use this link to subscribe.

Massachusetts’ minimum wage will go up again. The fate of other laws is less...

News - December 31, 2021 0
It’s difficult these days to predict much with certainty. But here are some of the laws coming, and possibly going, in 2022:Wage changesFor the...

Channel 4 privatisation is a solution in search of a problem

News - June 18, 2022 0
The writer is a founder of Wonderhood Studios and is a former chief executive of Channel 4Legislation is easier to announce than implement and...

What it was like on the first British Airways flight to the US on...

News - November 8, 2021 0
An emotional return to New York: What it was like on the first British Airways flight to the US on reopening day Advertiser...

News - August 21, 2022 0
BANGKOK — Singapore announced Sunday it will decriminalize sex between men by repealing a colonial-era law while protecting...

News - December 22, 2022 0
It’s been just over three months since King Charles III took over the throne — and the monarch has been busy making changes within...
© 2022 Venture Current is a Flag Media LLC Publication. All Rights Reserved.
VC is part of the FLAG Token rewards network. Clients and partners can use FLAG Tokens for VC products and services.
VC runs 'Automatic' software. Stories posted here come from generic-topic Google news RSS feeds as well as client and partner-approved content.
If a story appears on this page that needs to be deleted due to licensing issues, please message us immediately so we can help you.