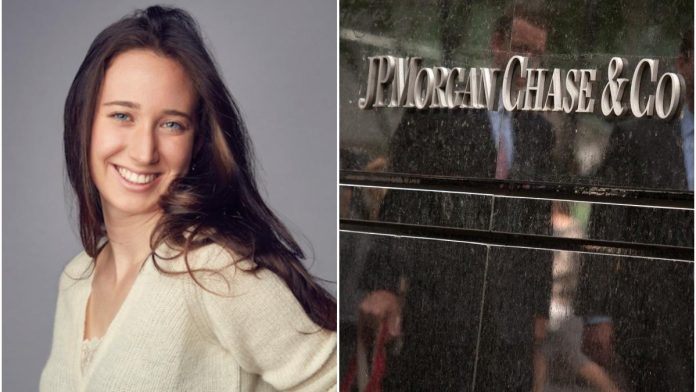 The lawsuit alleges that Charlie Javice, founder of a startup titled Frank, had claimed that her platform had over four million users while, in reality, the number was around 3,00,000 users back then.

By Divyanshi Sharma: American bank JP Morgan Chase sued a 30-year-old Fintech startup founder after alleging that she fabricated numbers of users of her platform. The lawsuit alleges that Charlie Javice, founder of a startup titled Frank, had claimed that her platform had over four million users while, in reality, the number was around 3,00,000 users back then. The rest of the users, the bank alleges, were made-up in order to sell the startup.

JP Morgan Chase had acquired Frank for a value of USD 175 Million (Rs 1,450 crore) in 2021. The lawsuit against Javice was filed towards the end of 2022 in the U.S. District Court in Delaware.

What does the lawsuit say?

As stated earlier, the lawsuit alleges that Javice claimed to have over 4 million users on her platform, Frank, at the time of the acquisition. In reality, the complaint alleges, there were less than 3,00,000 users at the time. The lawsuit also states that Javice lied about the platform’s success and produced a fake data list with users’ names, addresses, date of birth, and other personal details.

“Defendant Charlie Javice founded a small start-up business known as Frank that seemingly had the potential to grow and become a successful enterprise in the future, and appeared to have had had early proven success. But to cash in, Javice decided to lie, including lying about Frank’s success, Frank’s size, and the depth of Frank’s market penetration in order to induce JPMC to purchase Frank for $175 million,” the lawsuit states.

The complaint also states that Javice had initially refused to share information about their customers, citing ‘privacy concerns’. However, upon being insisted on sharing the information, she created ‘customer accounts out of whole cloth’.

“At the time of JPMC’s request, Frank was almost 4 million customer accounts short of its representations to JPMC. Rather than reveal the truth, Javice first pushed back on JPMC’s request, arguing that she could not share her customer list due to privacy concerns. After JPMC insisted, Javice chose to invent several million Frank customer accounts out of whole cloth,” the lawsuit states.

How were the fake accounts created?

Further, the lawsuit alleges that the fake user accounts list was created by a data science professor from a college in NYC who used ‘synthetic data’ techniques for the purpose and was paid USD 18,000 dollars for his services. These accounts were then shared with a third party vendor for ‘validation’, the complaint states.

The lawsuit also names the startup’s Chief Growth Officer, Olivier Amar, and says that before they (Javice and Amar) approached the data science professor, a top level engineer at the company was asked to create the fake list. A marketing firm named ASL Marketing was also named in the lawsuit.

JP Morgan’s complaint also alleges that Javice had tried to cover up the entire issue by instructing the vendor to ‘delete the fake list’.

The startup, Frank, markets itself as a platform for helping students who are trying to get educational loans. It is known to simplify the application process for its users and has launched in 2017. The startup has been described by Javice as the ‘Amazon for higher education’.

News - January 9, 2023 0
Mary Daly became the latest Federal Reserve official to raise the prospect of the US central bank slowing the pace of its interest rate...

News - December 28, 2021 0
Wang Jing’s hand dives into a mound of soil and pulls out a bulging bunch of oyster mushrooms. “Look how pretty they are,” the...

S&P 500 threatens to open in bear-market territory: What investors need to know

News - July 7, 2022 0
US stocks rallied for the fourth straight day on optimism that the Federal Reserve will be able to curb inflation without tipping the economy...

News - September 27, 2021 0
The Dow Jones Industrial Average rose even as growth stocks got walloped Monday. Also, House Speaker Nancy Pelosi moved to bring the $1 trillion...
© 2022 Venture Current is a Flag Media LLC Publication. All Rights Reserved.
VC is part of the FLAG Token rewards network. Clients and partners can use FLAG Tokens for VC products and services.
VC runs 'Automatic' software. Stories posted here come from generic-topic Google news RSS feeds as well as client and partner-approved content.
If a story appears on this page that needs to be deleted due to licensing issues, please message us immediately so we can help you.